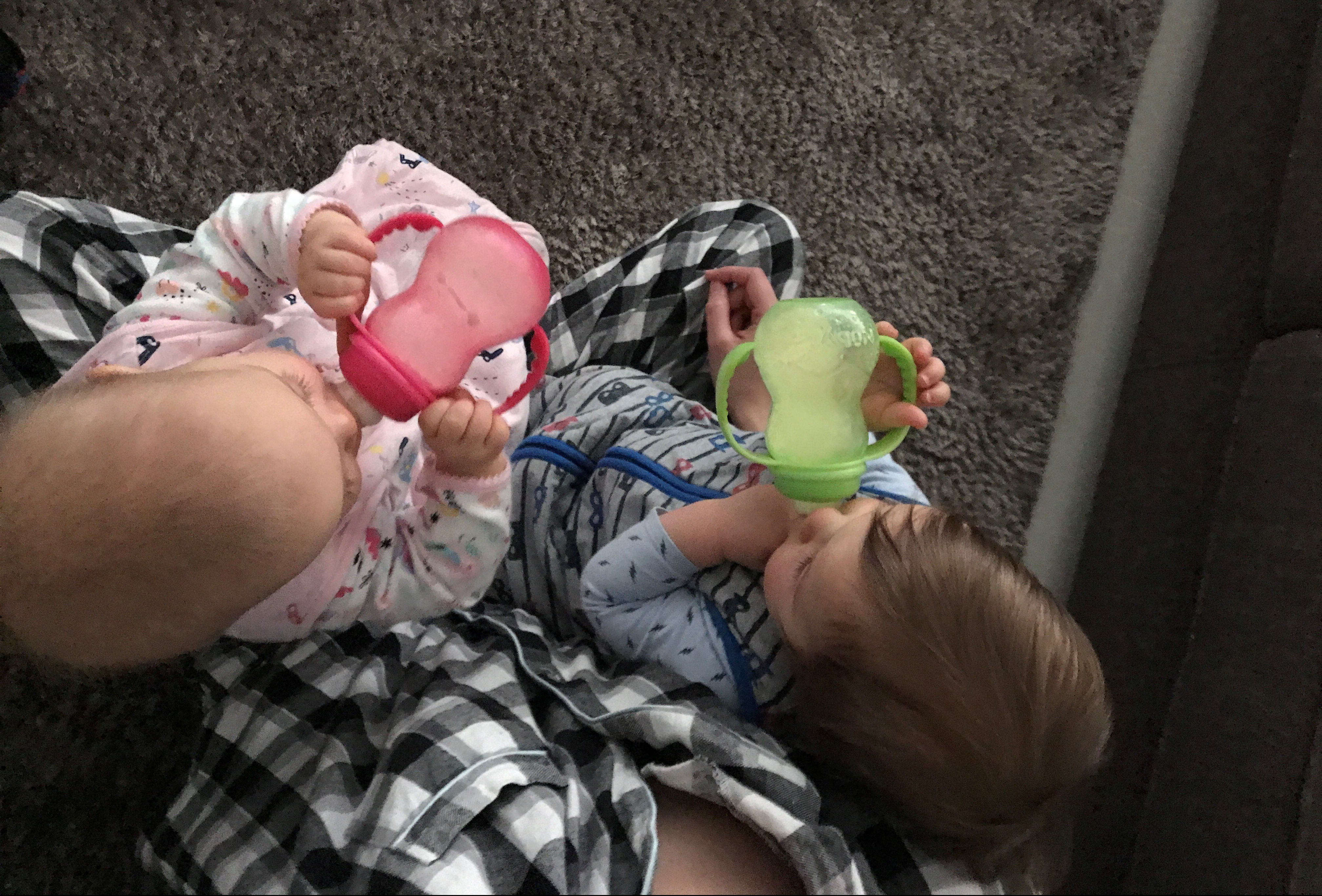 After reaching my goal of breastfeeding our twins for 12 months, I decided I was ready to start weaning them. In the lead up to weaning, I was concerned about how it would even be possible to stop breastfeeding two babies, how they would adjust, and of course, the threat of mastitis. I trusted my gut and took it slowly, taking 4 weeks to end our journey. I am really proud of how long we were able to breastfeed for, and I was so happy and relieved with how well the twins adapted.

As we approached our 12 month milestone, I was still breastfeeding the twins 3 times a day around meals. I had them in a routine, feeding them first thing in the morning, again when they woke from their afternoon nap, and then again before bedtime. If they woke during the night, which we were lucky they rarely did at this age, hubby was able to settle them without a feed (very lucky I know, but teamwork is so crucial with twins). After their 1st birthday, I decided I would start cutting down feeds, and approximately a week later, I dropped the middle feed of the day. Rather than giving a milk bottle, I chose to substitute this feed by offering the twins their water bottles and adding in extra dairy during the day with yoghurt, cheese, extra milk in their cereal etc. The twins took a couple of afternoons to adjust, needing a bit of encouragement to drink from their water bottles and some extra cuddles, but thankfully, it didn’t seem to worry them too much. I was also relieved not to notice any major changes or breast discomfort with cutting out this feed.

Three weeks after their birthday, and approximately 2 weeks after cutting down to the 2 feeds, I decided that I would wean the morning feed next. I gave the twins their first bottle / sippy cup of cow’s milk, and just like their older brother, they loved it! I chose to drop this feed (instead of the evening feed), as I thought it would allow me to see how the twins reacted to the cow’s milk during the day, and I also wanted to get them used to the bottle before introducing it at bedtime, so as not to disturb that routine by introducing something completely different (we all know how precious a smooth bedtime routine is!). My breasts felt quite uncomfortable by the end of that first day, and I was cautious in protecting myself from any knocks, but that feeling eased after the evening feed, and thankfully didn’t return the next day. I was both surprised and relieved at how well my body adjusted and also how well the twins took to the change.

Over the week that followed, I felt reluctant about cutting down the last feed (I know, I was surprised too!). Even having my very first weekend away from the kids coming up, still didn’t make me want to rush the process. Things sped up on the Tuesday night though (8 days after stopping the morning feed), as sick kids meant that I needed to attend a family dinner celebration on my own, leaving hubby at home to look after the kids. I hadn’t really given the evening feed a thought, until Adam suggested that he give the twins a bottle of milk as he would be doing that over the weekend and it would be good to start earlier. I felt a little upset and as though I wasn’t really prepared for the feeding to end. I had wanted to capture the last feed for my own memories and celebrations, and I hadn’t done that the night before. Despite this, I knew that it would be easiest for the night and for the weekend if they had a bottle, and so I accepted that we’d reached the end (at least I tried convincing myself of that). While we were having dinner, Adam sent my family and I a photo of the twins having their first evening bottle and I won’t lie, it stung a little.

The next day, the milk makers were still quite full, and so that night I decided I would feed the twins and make that our last breastfeed. I felt that I was more prepared for the end, I enjoyed their last feeds, and I was able to capture the moment(s) how I’d planned. On the Thursday night, we went back to the bottles and the twins were unfazed (they could have pretended to miss me a little, right?). Although I had the occasional ‘leak’ over the following weeks, I didn’t get that full feeling again, but instead felt rather deflated (yes, I’m talking about the airless airbags). This definitely helped put my mind at ease (…that awful mum guilt) with the decision as I felt my body had been waiting for it. I also think that extra feed on the Wednesday night helped with slowly decreasing my supply.

Overall, I was really happy with how our breastfeeding journey ended. My Mum was quite surprised at how relaxed I was about weaning the twins, after listening to my countdown from the beginning, she thought I would have cut them off ‘cold turkey’ on their 1st birthday, and to be honest, so I was I. I found that I was quite emotional, especially compared to weaning our firstborn, as it signified the end of something I was so incredibly proud of, and that the twins were growing up. I was relieved that I avoided the dreaded mastitis during weaning, and that the twins adjusted so well. I couldn’t have wished for things to go smoother, and for a more positive end to what was a very challenging, but rewarding experience.

*Please note, that this is for informational purposes only. It was written by a Mother trusting her gut who is not a professional / medical expert.