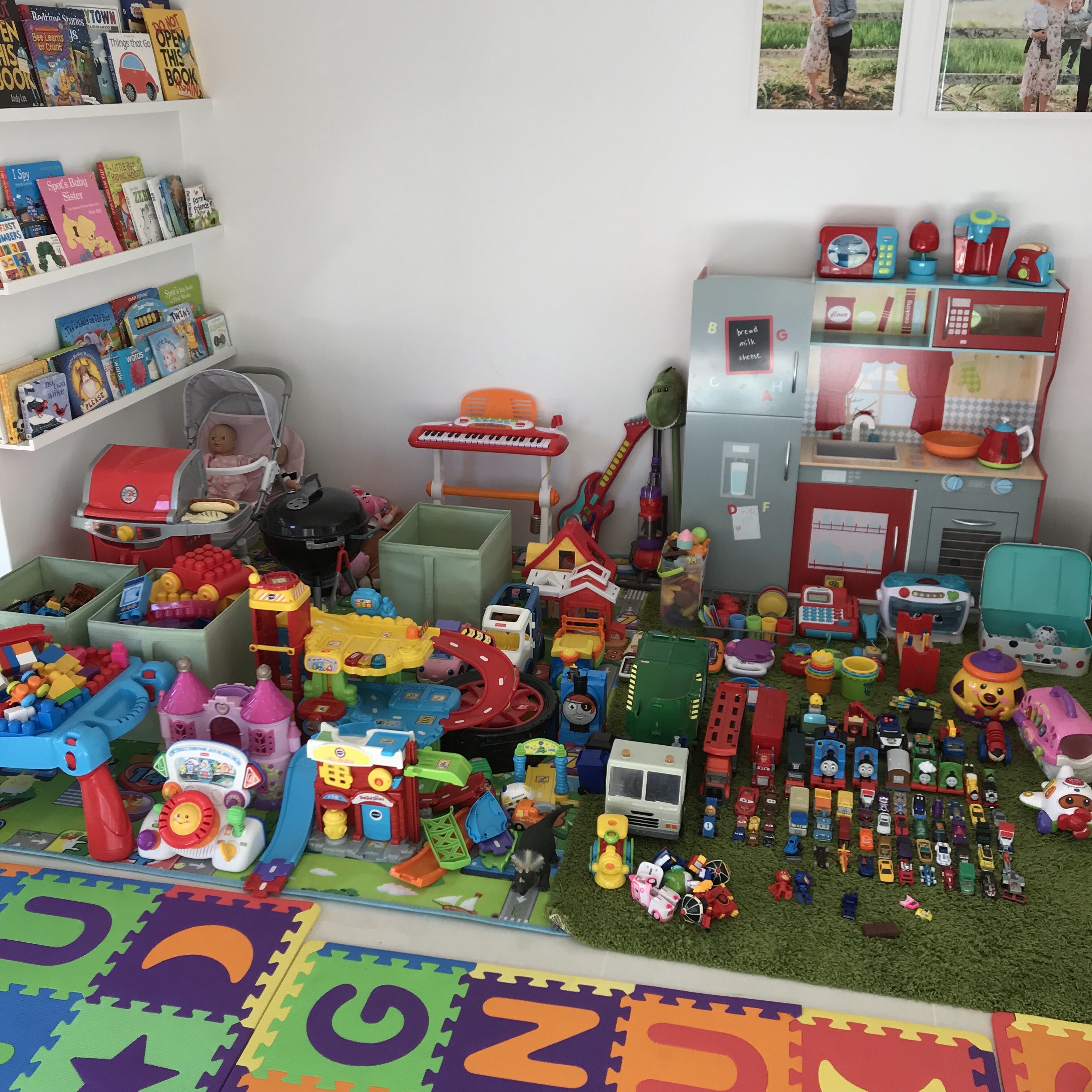 Over the last 18 months, we’ve had what we call, ‘Project GSD’ (Get Sh*t Done), taking place in our house. We started by pulling together a list of things we want to do around the house (which we sometimes add to after we’ve completed a new job that wasn’t on the list). Jobs like, giving our room a makeover (which we did last August), creating a nature play area for the kids (which we finished last September), sorting through our ‘junk room’ (which finally tackled last month), decluttering wardrobes, etc. One of the things that I’ve being trying to do, unsuccessfully, has been to declutter the kids toy room.

Last year, we created a great play space for the kids out in the main living area, separate to the designated activity area that we have in the back of the house.

We did this so that I could keep an eye on all 3 kids in the main living area and could block off the front and back areas of the house. As the twins were only 8 months old at the time, I wanted to be able to see them, and their big brother, whilst doing things in the living area / kitchen, and to know what they were up to / getting into. On the occasion that we had visitors, I also wanted to be able to sit at the dining table, instead of hovering over a half wall, whilst watching the kids and attempting to have a conversation. So the second play area was created, but what came with this, was also a clear view of the ruins that remain once the kids have let loose in the play area, with toys constantly strewn across the floor.

We have, what I think is, a CRAZY amount of toys. The majority of which have been gifted (as presents or hand-me-downs) by our large and lovingly generous families. As the pile of toys has continued to grow over the years, I’ve found myself saying, ‘no more toys please’, as we approach each Birthday and Christmas. Whilst I don’t enjoy being the ‘fun police’, as I know how excited the kids get (especially Mr 3) when they get a new toy, and how you want to be the person that gifts an exciting present, I also know that we already have too many toys. I’m conscious that more toys means more clutter, and gives us a bigger task when it comes to finding homes for them or cleaning up, but I’m also conscious of the impact it has on the kids. Not only the impact of them having so many things and potentially not valuing them, but also the impact of them being amongst all of the things, as I have noticed that once they have turned the play area into a bomb site, they don’t go back to play in it.

Now, over the past 18 months, I’ve attempted to organise a ‘toy rotation’ and to cull some toys, but, to be honest, I’ve struggled.  Whilst it is easy to pass down toys that are no longer age appropriate or to throw out toys that are beyond repair, I’ve found it hard to cull beyond that because I know that family or friends have gifted our kids these toys and that they are of value to the kids. I definitely prefer the toy rotation method to culling, as it not only means fewer toys in the play area, and therefore only a portion of the mess, but it also means not having to get rid of any toys. However, despite my efforts, I have had my battles with this too.

In my quick attempts at organising a toy rotation, I’ve found it difficult to decide what the kids could do without for a week or so (okay, maybe more like a month or so by the time I remember to rotate the toys), and I haven’t found any successful hiding spots. I’ve tried putting some toys in the back spare room or putting a box of toys in a storage cupboard which has then been ‘locked’ with a ribbon. Both of these options have failed me (no surprises there!), as my clever little 3y.o would pick his moments (when I was distracted) to drag out what he noticed was missing, or what he wanted to play with, from the back room. He would also ask Daddy to ‘unlock’ the cupboard because he needed just one thing out, and somehow the whole box of toys would end up out again…

Recently, a friend shared how she had organised a toy rotation in her house as she too, struggled with the number of toys they had, the constant mess, and the lack of quality play with the toys. Upon reading her approach, I was inspired to give this toy rotation a ‘red hot go’, meaning that I would also put some extra effort into finding a decent hiding spot. What inspired me, was how she had categorised all their toys and organised their toy rotation based on a particular theme, having set up a construction zone for the first week of their rotation. I also found it encouraging how she had explained that whilst it might seem like a lot of work to stay on top of swapping over the toys (which had definitely been a thought I’ve had!), it would be equal to, if not less work, than cleaning up the mess that is left each day (or however long it takes you to get sick of looking at it).

So last week, I decided I would give this toy rotation a proper go.

I laid out all of the kids toys during naptime (okay, there were still a few missing) and organised them into categories – transport toys, mega blocks, kitchen / shop toys, etc. I then got out some plastic tubs and my labeller and sorted the toys into tubs, putting one option / category of toys into the tub, with a label on the front of the box, and a second option on top of the tub, with the corresponding label on the back of the box. I did this for some added organisation so that if option 1 was out, then option 2 could be away, and vice versa.

I then explained to our 3y.o what I was doing and why I was doing it, to create more space to play and to take turns playing with toys, etc. so that he was involved. We then worked out what toys should stay out for the first rotation, keeping in mind what his sister and brother might also like to play with. I then got serious about my storage spots and pulled out everything on the top shelf of our linen cupboard (a cupboard where the kids don’t go), and stored away the toys whilst the kids weren’t watching (and left the rest of the linen cupboard a mess… job for another day!).

After a week in, I feel like this has already been a success! Even just that first step of categorising the toys made it so much easier for me to make a decision on what toys should be kept out or put away. It also made it easy to pull together a little tub of toys to keep in the garage as our ‘travel tub’ if we ever need to take some toys out with us. Whilst the toys that are on rotation still end up strewn across the floor for the most part, the mess is about a quarter of what it was, and the toys that are out are getting some quality play time which is great. I have even noticed the kids going back in the play area to play with that smaller mess around, which has been a big win! I just haven’t noticed them packing the toys away unprompted yet… but experience tells me I’ll be waiting a long time for that. The play room feels lighter, I feel lighter, and even hubby has commented on how much nicer it is to play with the kids in the toy room without so many toys around, and that ‘less is (definitely!) more’.

Here’s hoping that we can keep this going, and that this helps someone else who may be struggling with tackling their toy room turmoil! Good luck! xx